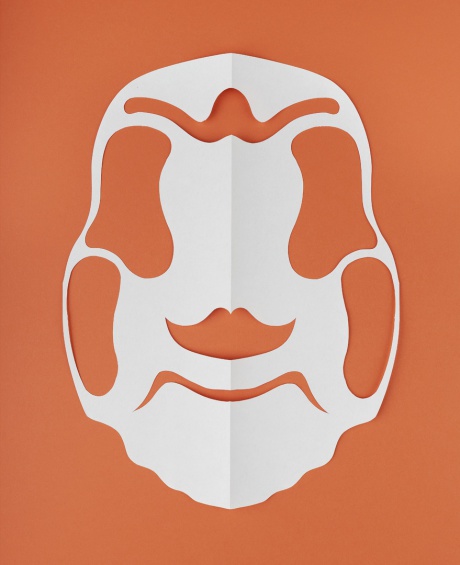 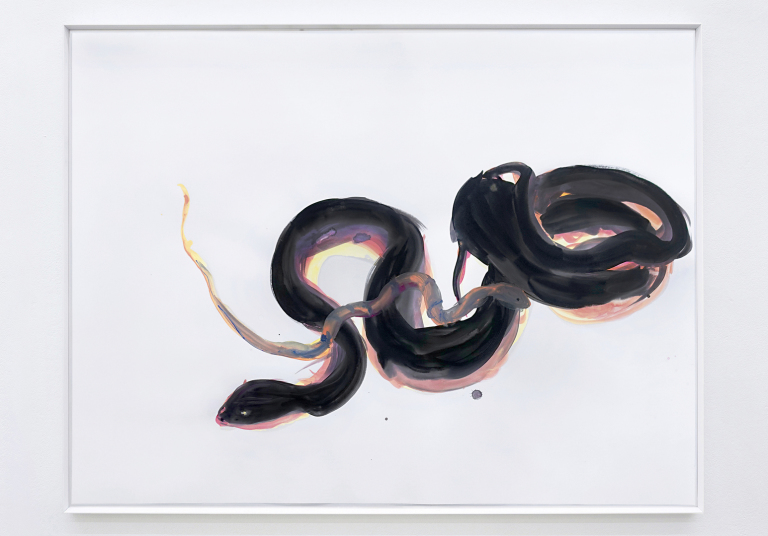 Abb.: Tina Ribarits, Two Snakes, 2021, Aquarell auf Papier, gerahmt, 100 x 125 cm
The exhibition MIMESIS presents works by Matthias Klos and Tina Ribarits. In these works, the artists approach a foreign cultural space as a mediatized experience, aesthetically encountering their own gaze in the process.
In the series "I only know Mifune and Kitano," Matthias Klos explores the effect of cultural clichés: personal associations such as crafts, paper, manga, samurai, Mifune and Kitano come together to evoke a "feeling of Japan" for which silhouettes seem to be a suitable medium of artistic communication. Drawn intuitively without preliminary sketches in a single continuous, concentrated step requiring high precision, they are mirror-image patterns created along the folded middle axis that fluctuate between ornamental abstraction and mask-like silhouette. Conceptualized by the artist as pictograms of a self-referential cultural iconography, they have a private character whose informational content can only be indirectly translated. They are derived from the Japan of cinema, of origami and comics, in short: from the cultural exports that tell us something about a country even if we've never been there. In the title, the artist mercilessly mocks his own (lack of) knowledge, which comes from the entertainment industry and popular culture, fiction and lore, but is also guided by ethnological interest and ultimately based on his own second-hand experience. At the same time, they are aesthetic objects that borrow from an artistic tradition of paper cutting that reached Europe centuries ago from Asia (among other places) and underwent a process of cultural transmission. Long regarded as a women's craft or traveling artists' work and only granted the status of art in modern times, the silhouette as a method of drawing on paper literally brings to completion the dividing line that marks the border between a figure and its background and allows it to be perceived. Matthias Klos' silhouettes, photographed on colored cardboard, have different sizes in the print that make their shapes seem inordinately large. With the framed, photographic image, the artist carries out a media transfer of the paper objects, emphasizing their pictorial aesthetics.
Tina Ribarits focuses on the forest as a theme and a surface for projecting the Other, permeated with images of the exotic, the mysterious and the wilderness. The artist is interested in a "virtual encounter" with nature where the natural world is at once both an idea shaped by culture and a reality that is not untouched or ahistorical, but instead marked by the colonial past and economic interests. Her large-format drawings show birds and snakes from the tropical forests of Latin America. The artist finds templates for them in various sources, such as the Internet, books or her own photographs. These are photographs that create images of a foreign habitat while also constituting a view that suggests physical proximity. Snakes and birds appear independent, untamable; decorative feathers and snakeskin are also trophies of civilization. At first glance, the drawings may resemble 19th-century scientific illustrations, but in the watercolor, which comes closer to painterly style, few of the details necessary for classification can be discerned.
Instead, they point out how media communicate the strange, how they foster a way of looking at the other that can hardly be separated from the beauty and attractiveness of nature's splendid colors and finesse. In the role of an investigator, Tina Ribarits gives aesthetic space to the reflection of postcolonial relationships, while the images she creates tell of a friendly encounter with our non-human counterparts.
Text: Synne Genzmer